In 2011 I spent five months living in a small town in Montana. Whilst there I created The Flayed Horse, a blog about human-animal relations in the American West. This collection of micro films, photographs and writing presents a critically challenging perspective of contemporary life in the American West. Two films from the Flayed Horse were subsequently commissioned by FLAMIN and Channel 4.

Episode One: The Grizzly Experience
Within days of arriving in this small town I was standing outside the cage of Tonka, a captive Grizzly that lived on grain and marshmallows. The first time I saw him, they were inside the cage together…it was an intimate moment. This was the American West as I had not imagined it.

This short essay film is filmed entirely from outside Tonka’s cage one winter’s day in Montana. The filmmaker narrates her observations on Tonka and his life – a poetic and moving meditation on human-animal relationships.

Episode Two: I met a cowboy who invited me to watch him bull ride.
Years of genetic selection have created The American Bucking Bull an elite breed designed solely for their athletic prowess and desire to buck.

A stream of young cowboys enter the ring, hyped up at their upcoming challenge. As the ubiquitous national anthem is sung, they burst through the gate one by one mounted on their bucking bulls. Cut to the rhythm of the Star Spangled Banner, this film presents a subtle subversion of the concept of the American hero. 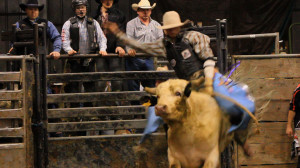 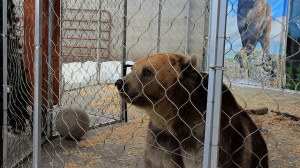 The Wonderdog site uses cookies, if you continue using it we'll assume that you're ok with this.OKMore info